Pictures from Devon are in!

Pictures from Dressage at Devon are in; courtesy of Purple Horse Design & Photography. #Shows #Sales 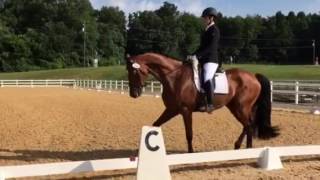 All Points Dressage is representing two new sales horses, and both of them rocked their first ever dressage competitions. Nine year old "Priceless" (known as Miles in the stable) who has so far enjoyed a successful career as an jumper and eventer, won his First Level Test 3 and gained plenty of new fans with his beauty and elegance under saddle. Miles First 2: Ruffles, a six year old mare, made her debut at Training level and won her Training 3 class. For her first show ever
eiren4

Hot off the press today: All Points Dressage sales horse Adel K and his Junior rider, Leah, have qualified to represent Region 8 at the 2017 NAJYR championships! Congratulations Leah! #Sales
eiren4

DOUBLE DIAMOND (ViVi) update: competing under the name De Nouvelle Vie, All Points sales alumni Double Diamond and his rider Emma Claire have started the 2017 season with a bang! This was a match made in heaven from the moment they met and we'll be following along with their life together. More soon… #Sales
eiren4

Congratulations to Taryn Kean! Talk about love at first sight, Taryn and Rubicon (Bunny to his friends) are a match made in heaven. There are no words for how perfect they are together and we can't wait to see them next year when we are back in Florida. #Sales
eiren4

Congratulations to Junior rider Leah Tenney! We are very excited to watch this talented young rider develop her partnership with Adel, they already got two qualifying scores in their first competition together! #Sales